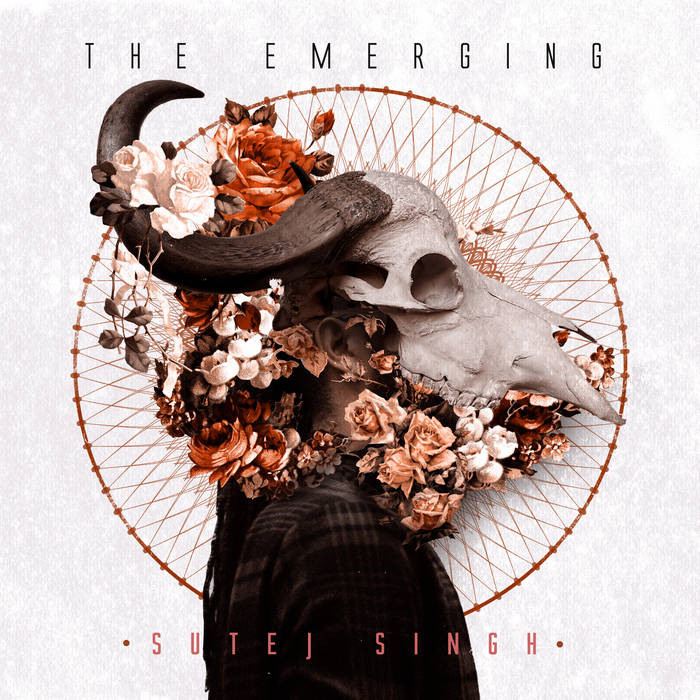 budski Life for me is, amongst other things, witnessing events, love, experiencing emotions, engaging lovely people thereby satisfyingly interacting on different levels and obviously a huge shared interest into music, particularly progressive rock and its adversaries incorporating a more heavier approach flowing towards metal. I find that pinpointing meaningful events and thoughts into perspective becomes easier with age but sometimes interpretation of everyday life can lead to prejudice, though thankfully we have several ways to conquer this minor flaw through friends and loved ones; soothingly this time it’s the music of Sutej Singh portrayed on The Emerging which effectively does the trick.
For when India comes up as a country I instantly think of Taj Mahal, Bombay, Spicy food, Bollywood and its Indian classical pop-interpretations, 1.2 billion people (go figure...), Mahatma Gandhi and the only musical artist I have ever heard of from that immensely huge country: Ravi Shankar, nothing ever so slightly prog-related. So when the opportunity presented itself to encounter something progressive from India my interest was awakened; especially when further exploration on bandcamp revealed two involved musicians who gave me some of the finest memories I personally experienced ages ago: Joachim Ehrig (Eroc), ex-Grobschnitt, and Christian Moos formerly of Everon (or do they still exist?).
Initiated by the first sounds of Overture I slowly drift off in thoughts; it’s 1993 and Everon opens the Planet Pul Festival in Uden. Witnessing an eye-opening set and especially falling in love with Oliver Phillips's melodic approach on guitars, we immediately wade off to the cd-stand to buy their debut-album, which to our surprise was produced by Eroc. Memories stream; reminiscing about meeting them again at his studio during the mastering and mixing off their second album Flood, which sound-technical still amazes me with its sheer depth, broadness and particularly heavy bombastic approach; a sonic very sound and superb production and still one of my favorite albums, musically as well.
Then it happens, The Comeback Trail grasps my thoughts and I’m no longer drifting off. No, I’m actually wide awake and literally gasping for air surrounded by the same vibrant, bombastic ever so clear perfect production. Kylan Amos (Arena) on bass and Scott Higham (ex-Pendragon) on drums supply a steady and firm base and with a guitar sound almost identical to Everon, Singh provides ample of layers to his music showcasing his ability to create grandeur statements of monumental symphonic rock in the vein of Trans Siberian Orchestra. Richness, melody and atmospheric scenes follow each other in harmony supported by magnificent soloing and some lovely touches of orchestral arrangements supplied by Leon Ross.
Timeless , with guest Peter Henningsson (Fortress Of Fear) soloing, continues to impress with delving deeper, successfully adding several resting points and mellowed landscapes images, and words fall short to describe the feelings experienced. The same goes for _ Come Into Existence_ where Singh takes a proverbial dip into a thermal bath, displaying a more relaxed approach this time highlighting his love for David Gilmour's style.
Softly we glide towards The Emerging which is a turmoil of emotions, symphonies, calmness, goosebumps, and a whirlwind of melodic metal reflecting Dream Theaterand Haken, aptly enhanced by Raymond Hearne (Haken) guesting on drums. Gina Luciani adds cleansing flavors on flute and piccolo, to which Singh demonstrates his finest skills influenced by John Petrucci and Joe Satriani.
Fully buoyant by now Oceans Apart builds from a laid back jazz inspired melody where delicious Jerry Goodman violins gently stream into fresh orchestral arrangements ultimately ending in a crescendo of progressive metal as occasionally found on the more progressive albums by Savatage. Singh, having found his stride by now, invites us along on Walk My Path, another well composed prog-metal track incorporating atmosphere, depth and virtuosity; after which he manages to reveal yet another insight in Revelations. A majestic cinematic panorama slowly brightens up, flowing into prog where Irish dance and Celtic rhythms flow with apparent ease alongside exquisite touches of UK on violin, finally culminating in a shower of neo-progressive heavy prog.
It’s a strange sensation, but this album ticks a lot of boxes and certainly altered my perceptions of Indian music. The musicianship and execution is superb and leaves almost nothing to be desired, with the one critical note being that some songs are stretched just a tiny bit too long. According to fellow DPRP reviewer Andy Read there are already several Indian progressive bands out there, so let me be the first one to rate this album to be a great example of the Newly Encountered Wave of Indian Progressive Inspiring Rock (NEWIPIR), for Sutej Singh has crafted an exciting and thoroughly enjoyable album. Please join, dive in and swim along - that would be my recommendation. But right now I’m famished, so I’ll need some replenishing; I think I’ll go for a decent curry... Favorite track: The Emerging.

"..can’t think of anything to give this BUT 10/10”
- Progressive Music Planet

".....Singh can shred and noodle and do almost anything with sheer prowess. What also stands out is his songwriting capability. The guitarist picks and chooses moments to let loose, opting to write coherent songs instead of using an album to advertise his chops.."
- Rock Street Journal

"..it’s essentially an album that was written in the bedroom but built for a stadium.."
- Amit Gurbaxani (Writer/Music Journalist)

The 8-track album is a breath of fresh air, completely magical in bits, theatrical the next, it is completely cinematography in motion. If there were one word to describe the album, it would be beautiful.
- sbcltr .in

"The Emerging' is an outcome of sheer hard work and the grasp of musicality.
The progressiveness of the album and the dramatic song arrangement, is
enthralling. It is an honest and a brilliant effort."
- Saurabh Chaudhary (Guitarist - Parikrama)

"The Emerging by Sutej Singh is quite simply one of the best albums I’ve ever played on. This is a masterpiece of music incorporating so many different elements. There is something for everyone on this album.
Working with Sutej was amazing, inspiring and lots of fun."
- Scott Higham

"It was a pleasure to be asked to record drums on this album. I had a lot of fun getting to grips with this epic music and hopefully helped to bring Sutej's compositions to life!"
- Raymond Hearne (Drummer - Haken)

"I was honored when asked to be a part of this monumental album. Sutej's work is captivating and very well executed, making it fun to put my own flavour to it."
- Peter Henningsson

"..opulent, loud and proud"
-The Week

Sutej Singh is a Guitarist/Composer based out of Solan, Himachal Pradesh (INDIA).
After having played numerous shows in the northern region with various artists, Sutej released his debut album 'The Emerging' on 18th May 2018.
The Album hit #1 spot on the Apple Music India Rock Charts in the first week of the release itself ! ... more

Bandcamp Daily  your guide to the world of Bandcamp

Featuring Gary Bartz, 5 years of Rhythm Section Intl and an LP of the week by Nicolas Jaar